Your Life is a Party and You Choose the Guest List

Are you going to invite someone who will piss in your sink?
This post may contain affiliate links. Read the full disclosure.

For nearly three years, I worked part-time as a bartender at one of the most popular restaurants in Omaha. The restaurant is a trendy, two-story sushi and sake bar that sits prominently in the heart of the city’s famed Old Market District, and just a block away from the apartment building I once called home. I worked there not because I needed to, but because I wanted to, as it brought a much-desired shot of excitement to my otherwise humdrum existence.

The truth is: I’d always envied the life of a bartender. And, during my first night on the job, everyone could clearly see why. I was so entranced by the big-breasted blonde who offered to blow me for a martini, that I carelessly ignored the ever-flowing stream of drink tickets I needed to make for the wait staff. After a manager lambasted me for losing focus, it took me the better part of an hour just to catch up.

Within a few weeks, though, I’d sharpened my skills as a mixologist and learned to keep my libido in check. I even gained a loyal customer base, made up mostly of fun-loving lesbians who liked to tell me the latest in puerile penis jokes.

Still, I wasn’t part of the seemingly impenetrable clique that included the servers and other bartenders. They shared an unspoken kinship, one that proves common amongst those that dwell in the service industry. They were quirky and cool, with varied perspectives on responsibility. They had sleeve tattoos and body piercings and impressively active sex lives. I wanted in. But, I spent my days in a cubicle, wearing pleated pants and compiling spreadsheets for old, humorless squares. I sensed that I didn’t quite belong.

Thankfully, I had an idea.

If my coworkers weren’t going to let me into their world, then I could wholeheartedly invite them into mine. So, with fierce determination, I began to transform my sweeping, fifth-floor loft apartment into the greatest after-party space that downtown Omaha would ever see.

I discarded half of my furniture, hung up a dartboard and upgraded my stereo system. I put an antique home bar in the corner of my living room and replaced my kitchen island with a portable, handcrafted Beer Pong table. I filled my gumball machine with candy and condoms, and lined my bookshelf with the finest in adult party games. I reconfigured the lighting, placed a coat tree near the door, and put down a welcome mat that read: I Like it Dirty. I stocked my freezer with ice, my cupboards with cups, and my bathroom with ultra-soft toilet paper. Then, I used my mother’s Costco card to buy as many bottles of booze as I could fit in my car.

When I arrived for my shift on Friday evening, I told every bartender, busboy, chef, server and floor manager that I was having an epic, not-to-be-forgotten, come-one-come-all after-party, starting promptly at 2:15 a.m. I gave customers my phone number and address, insisting that they experience some real-deal, late-night fun. I’d even slipped handwritten invitations under the doors of everyone who lived on my floor, just so they’d know that once the bars closed, apartment 505 would be open for motherfucking business.

After my shift, I quickly fulfilled my closing duties, collected my tips and scurried home, eagerly anticipating a parade of revelers to march through my door. I changed my clothes and cracked open a beer. I dimmed the lights, filled the ice bucket, and set out snacks. I unlocked the door and turned on the music. Then, I sat down on the couch to momentarily bask in the glory of becoming my neighborhood’s new king of after-hours.

Shortly thereafter, I fell soundly asleep with my hand in a bowl of salsa. Not one person came to the party.

There are few things in life as humiliating as throwing a party that nobody attends. But, to let this dampen my spirit would have only exhibited weakness. So, I pretended it never happened, and arrived for work the next night with the same impassioned announcement.

I told everyone that I was having an after-party for the ages, and they’d be foolish to miss it. I told them that there would be laughter and games and food and an abundance of free alcohol. I told them that they had an open invitation, and there was plenty of room for all. But, none of this seemed to resonate. Because, just like the previous night, not one person came.

I persisted for weeks, preparing to host parties that never transpired. I thought about changing my approach, offering an incentive, or just giving up. I wondered if I was destined for a life of solitude, woefully eating Triscuits on the couch until the day I die. Maybe, I simply hadn’t evolved to be a social butterfly.

Then, in the wee small hours of a Saturday in winter, I heard a succession of knocks on my door.

I gleefully swung the door open, only to discover five of my coworkers, desperate to let off some steam after a long, frenzied shift. I welcomed them in, offered them drinks, and insisted they make themselves comfortable. We sat around, smoking weed and swapping stories until sunrise. And, once they were gone, I couldn’t wait for them to come back.

My first few parties were similar – small and intimate, with great conversation. But, gradually, they grew, as more and more people caught on.

There were frat boys and freaks and drifters and drag queens. There were geeks and goths and hipsters and hooligans. There were copulating couples, coke-snorting cooks, and beer-guzzling busboys. The drag queens did X and the drifters dropped acid. My landlord showed up with a bag of kazoos. Suzy the sous chef took off her shirt. Derek the dishwasher puked out the window. And, no matter what, Bobby the bartender pissed in my sink. 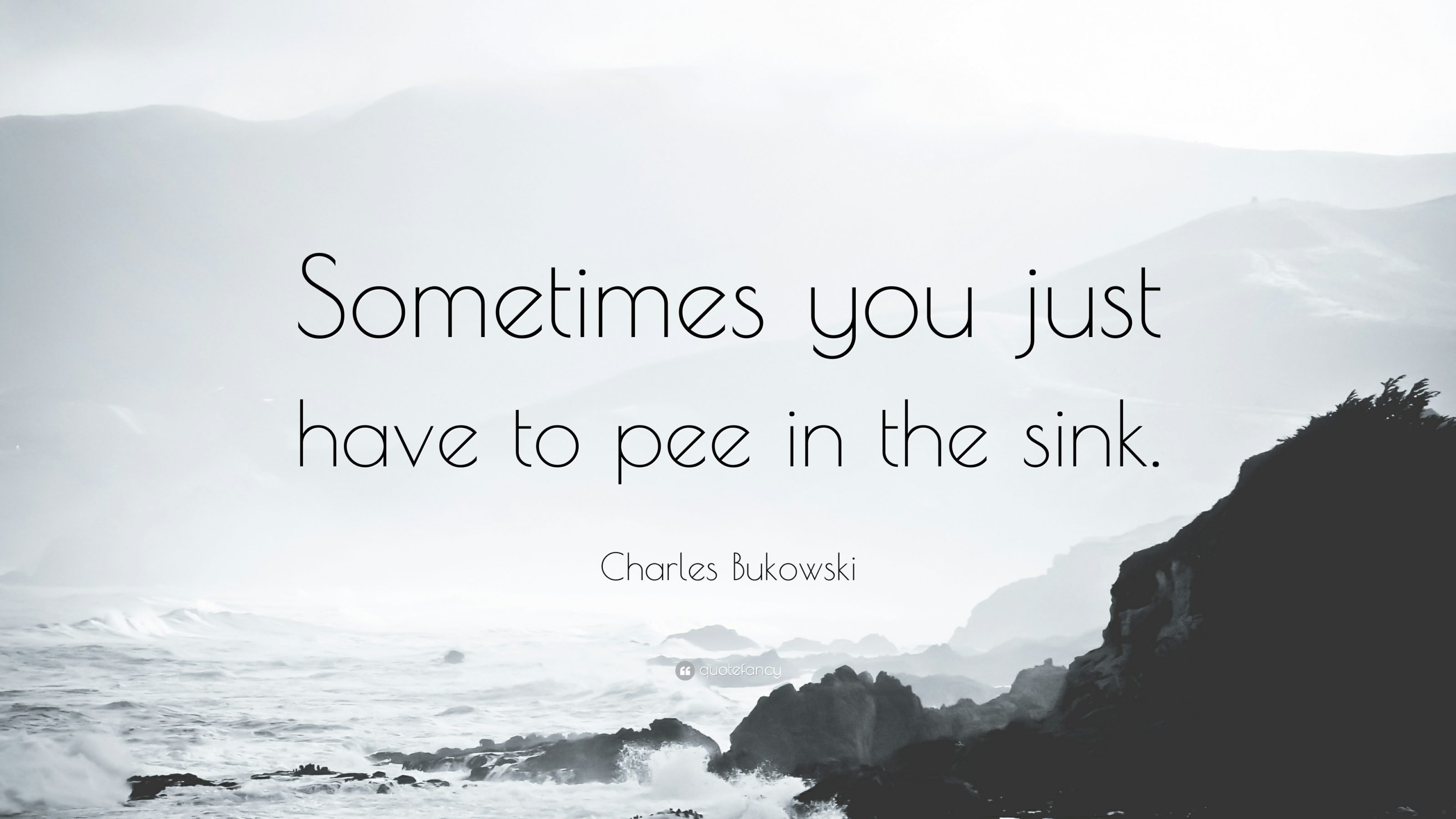 Each party was more debaucherous than the last, and I never showed anyone the door. I let everyone run wild, damage my things, and exploit my hospitality. I failed to set rules or exercise authority. And, when the smoke finally cleared, I was the only one left to clear the debris.

I’d wake up in mid-afternoon to find cigarette burns on the couch, salsa stains on the carpet, and cups and cans in every crevasse. I’d pick up the trash and scrub the floors and clean the counters until the place was spick and span. Then, I’d have everyone back so they could party again. And I did this every weekend for more than a year, before closing the door on my parties for good.

THINK OF YOUR LIFE AS A PARTY

The fact that you’re alive isn’t just cause for celebration, it’s a goddamn miracle – so improbable that, if you try to comprehend it, your mind will almost certainly turn to mush.

And, that’s just the beginning.

Your grandparents, great grandparents and everyone before them – going back millions of years to the first Homo sapiens – had to meet, fuck, and have children. In the end, explains Binazir, the probability of your being born was one in 10, followed by 2,685,000 zeroes.

I’ll give you a moment to unboggle your brain.

Tragically, so many of us tend to slog through each day, never truly appreciating what it means to be alive. We succumb to our fears, give up on our dreams, and tolerate the intolerable. We get into bad jobs, bad relationships, and bad situations, allowing others to treat us poorly. We do this for years, decades, or a lifetime. Then, of course, we die.

Think of your life as a party, and you’ll never forget that life is meant to be enjoyed, not endured. And, just as crucially, you’ll begin to live under the principle that people will only treat you the way that you let them.

I look back on my after-parties with fondness, knowing they led to lifelong friendships, lasting memories, and the occasional sexual escapade. But, they serve as a glaring reminder – a reminder that the quality of our lives is greatly affected by the quality of the people with whom we surround ourselves. Not to mention our ability to set boundaries and rules.

Think of your life as a party. Every party has rules, if even just a few. No stealing, no yelling, no running, no double-dipping. What are your rules? What kind of behavior do you expect from the people in your life? What are your benchmarks for honesty, kindness, and dependability?

The next time you’re befuddled by a new friend or lover, ask yourself: Is this the kind of person I’d want at my party? If the answer is no, don’t be afraid to show them the door.

Your life is a party, and you choose the guest list.

Who’s on your list? Who are you going to invite to your party?

Are you going to invite liars? Cheaters? Narcissists and psychopaths? People who are abusive?

What about people whose actions don’t match their words?

What about bigots? Or sexists? Or just plain assholes?

Your life is a party.

The Life-Altering Benefits of Fuck You
The Cult of Meditation and Why You Should Join
How to Not be the Biggest Fucking Downer on the Planet
How to Get Over Someone You Love
On Your Quest for Love, Know When to Run Like Hell
Share
Tweet
Reddit
Share
Pin
Pocket
56 Shares