What'll happen if you do nothing?
This post may contain affiliate links. Read the full disclosure.

When I decided to move from my hometown of Omaha to New Orleans, I wish I could say that it was one of those gloriously spontaneous movie moments, where I threw some tee shirts, my guitars and a typewriter in the back of a convertible and drove off into the sunset, guiding the steering wheel with one hand and fist-pumping the sky with the other.

In reality, I wasted far too much time making excuses.

I’d been living in the same apartment in downtown Omaha for nearly a decade, the last few years of which were particularly depressing. In addition to suddenly losing my father, I detested my low-paying 9 to 5 job, published a book that didn’t sell, started a company that failed, ruined a number of friendships and had far less sex than I’d like to admit. If someone had come by to check on me, there’s a good chance they’d have found me sprawled out in the bathtub, man-crying and smoking cigarettes.

I just didn’t get it. I’d watch others form relationships, blossom in their careers, achieve their goals and find happiness, while the Universe seemed to get a kick out of repeatedly leaving me with my dick in the dirt. Of course, when I’d explain this to a trusted friend or therapist, they’d merely point out my accomplishments, remind me of my talents and say “be grateful for what you do have.” Indeed, practicing gratitude can have enormous benefits. And, yes, there are starving children in Africa. But, sometimes, it’s hard to be grateful – especially when you’re trying to decide if you should stick your head in the microwave or jump in front of an oncoming dump truck.

The fact is, love and riches and happiness were not going to appear from the ether. And, I doubted I’d have some inexplicable Eckhart Tolle-like transformation, where I’d wake up in a state of bliss and then spend two years on a park bench, fiddling mindlessly with my lip. After all that time I spent wishing and hoping and man-crying in the bathtub, I became absolutely certain of one thing: it was all up to me. Change wasn’t just going to happen. I needed to sack up, get moving and make it happen.

According to Neuro Linguistic Programming (NLP), real change begins at the easiest and outermost level: your environment. Of course, when it comes to making this change, conventional wisdom often points to a familiar old chestnut: wherever you go, there you are. Cheesy as it may be, it’s an adage that has merit. If you’re not at peace with yourself, you’ll be unhappy no matter your physical location. But, if you’re committed to deep, personal transformation, changing your environment is a pretty decent start. 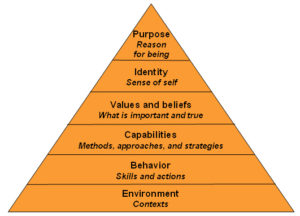 I’d become stagnant and bored and reclusive, and I wanted to move to New Orleans. I’d fallen madly in love with the city – as many do – and pictured having a life there, in great, hedonistic detail. There was just something about it – or perhaps many things – pulling me in with irresistible force. The colorful, shotgun-style houses, the rolling streetcars, the decorated oak trees, the fresh-off-the-boat seafood, the second line parades and 24-hour-a-day parties. New Orleans is a powerful hypnotic that can leave you joyfully stupefied well after you’re gone. And, yet, I conjured up every dumbass reason not to make the move.

For one thing, it seemed like a hell of a lot of work. I’d have to find an apartment and get a new job and pack up my belongings and rent a U-Haul and change my address and cancel my DIRECTV. God knows what a pain in the ass those things can be, especially that last one.

It’s not even worth it, I thought.

Should I really uproot my life? I’ll have to get rid of my couch, and I love my couch. Is New Orleans even the right place for me? It’s too far from home. What if my mom needs me? I won’t know anyone. The homicide rate is too high. It’s too fucking humid. I’ll have to start wearing pastel-colored shorts. Climate change is real, and there’s going to be another hurricane. My car can’t handle the potholes. I might drink too much. There are too many bugs. I don’t like bugs. There are giant cockroaches. There are little lizards everywhere. I don’t like lizards. Everyone has an accent. And believes in voodoo. Now that I think of it, New Orleans is fucking weird.

I spent months trying to talk myself out of action, stuck in a whirling spiral of stupidity and self-doubt. Each one of my excuses was more ridiculous than the last – it was kind of impressive, actually. And, the longer I made excuses, the more disgruntled I became. Until, finally, I was out. I had scraped every crack and corner and crevasse of my brain, and there were no more excuses to make. It was time to decide: take the first step towards change or sit in my apartment and rot.

Brian Tracy, once wrote, “You can make excuses or you can make progress. You choose.” And, so I did. I chose progress. I chose to stop making excuses. Because, excuses prolong inertia. And, inertia is death.

WE ALL MAKE EXCUSES. BUT, WHY?

If dreadfully lame excuses are what stand in the way of our progress, why do we make them? Why do we consistently talk ourselves out of changing our lives for the better? Why do we figure out what we need to do, and then, you know, never actually do it?

Well, the short answer is fear. The same kind of fear I experienced when contemplating a cross-country move. Or, the same kind of fear you felt last week at the supermarket, when you saw that devastatingly gorgeous guy or girl and all you wanted to do was say something but you couldn’t think of what to say and you didn’t want them to think you were a weirdo and the thought of humiliating yourself made you throw up a little and they were probably spoken for anyway so you just stood there and stared for a minute and then grabbed some frozen burritos and got the fuck out of there. Yeah, that kind of fear.

We create excuses or justifications to either procrastinate or utterly avoid the discomfort of new thinking and new behavior. So, thought mightily protects its sovereignty by proclaiming the danger of new thinking and new terrain. We become very adroit at justifying why we ought not venture into this new territory, ranging from a simple ‘it’s too scary’ or ‘it makes me uncomfortable’ all intended to defend against the new movement.

Fear is what traps you inside your comfort zone, and whenever you do something outside your comfort zone – whether it’s moving to a new city or approaching a sexpot in the supermarket – you’re hurling yourself into the unknown. And, once you’re there, you might come face to face with failure and rejection and distress and embarrassment. You might have to take on new challenges and new responsibilities. You might slip and fall and break something of value and look like a total putz. Or, you might do something remarkable. There’s really no way of knowing. That’s why it’s called the unknown. And, yes, the unknown can be a pretty scary place, in that oh fuck-what was I thinking-shit your pants kind of way.

But, why are we so scared of the unknown? If we are to believe all of those horribly platitudinous quotes about comfort zones, shouldn’t we be more inclined to explore new ground? For most of us, the answer is one big, pathetic NO. 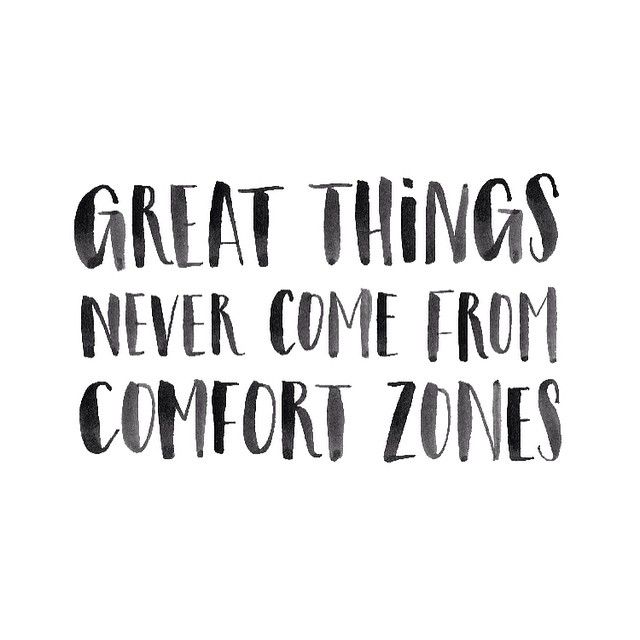 Fear of the unknown is an unavoidable part of the human condition. As human beings, we have an inherent, psychological need for certainty – for comfort – because it makes us feel like we’re in control. And, funny enough, we also have the need for uncertainty – for variety – because it reminds us that we’re alive. But, as Tony Robbins often points out, “most people value certainty a lot more, and that’s why their lives are so boring.

THE HARMFUL EFFECT OF EXCUSES

It means, as Dr. Daniel Johnston wrote in his book Lessons for Living, that “you’re miserable but you are used to it.”

If being comfortably miserable doesn’t strike you as all that horrifying, then consider the host of other damaging consequences that can come from repeatedly making excuses. Not only will you fail to achieve your goals, there’s a good chance you’ll develop limiting beliefs, stifle your creativity, experience massive regret, even suffer from paranoia.

Let’s face it: you only get one life. You can create a life you deserve, or you can settle for a life of excuses.

SO, WHAT AM I SUPPOSED TO DO ABOUT IT?

To stop making excuses, you’ll need to admit that you’re making them in the first place. Seriously, just admit it. Acknowledge that you’re a walking, talking, capable human being with 100 billion neurons in your brain and potential oozing out of every hole. Then, say this out loud: I’m making excuses and I’m being an idiot.

Not sure if you’re making excuses? They aren’t hard to recognize. Most of yours probably start with the words “I don’t.”

Once you’ve acknowledged that you’re being a fucking idiot, you’ll feel a lot better. But, there’s still a hurdle to overcome. You still have to do something. You still have to take action. And, taking action, as we know, can be scary. So, we spend our time in fear, vomiting out excuses and spinning our wheels and obsessing over the consequences of taking action.

Instead, think about the consequences of inaction.

What if you don’t approach that stranger in the supermarket? That could be your future spouse or your new best friend or your next business partner or the drummer in that band you love. But, you’ll never know. Unless you stop making excuses.

What if you don’t get out of your unhealthy relationship? You’ll continue to come home feeling bitter and resentful, wondering if things will ever improve. And, they won’t. Unless you stop making excuses.

What if you don’t quit your soul-crushing 9 to 5 job?? You’ll sit in a cubicle and stare at a computer screen and take orders from an imbecilic dickhead for the next 40 years. And, that’ll be your life. Unless you stop making excuses.

So, what if you don’t stop making excuses? Well, you’ll stay right where you are. In comfortable misery. In a state of inertia. And, all you’ll have to show for yourself is a head full of regret and a hand full of frozen burritos.

The Life-Altering Benefits of Fuck You
Why You Need a Relationship Posse
How to Get Over Someone You Love
Mother Knows Best: Why Generosity is the Way
You Already Have the Information You Need